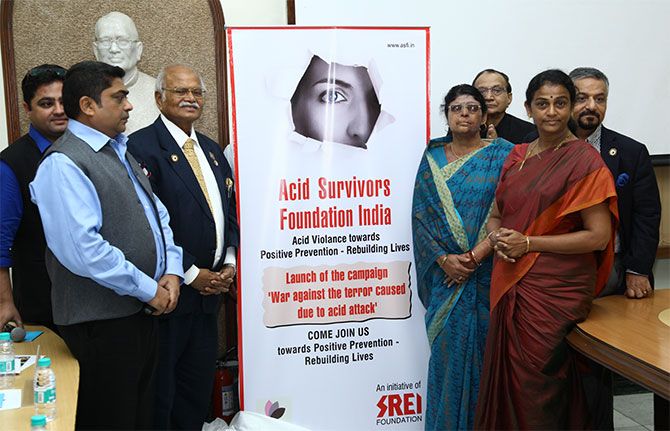 An initiative of SREI and The Kanoria Foundation

Kanoria Foundation is a multi-faceted charitable organisation that strives to support marginalised communities in a holistic way that promotes their health, education, and all-around well-being.

An acid attack can have catastrophic consequences for the victims. By shattering their main physical/social identity in an instant, they cause severe bodily pain and long-term psychological trauma, which is why they are often seen as pity victims. While several incidents of acid attacks against males have been reported in India, the crime is generally perceived as a form of violence against women by men because women are victims in more than 80% of cases and the perpetrators are male in 84% of cases. The majority of victims are between 18-22 years of age. Kanoria Foundation and SREI work dedicatedly towards helping these victims.

During the second week of April 2018, the Acid Survivors and Women Welfare Foundation (ASWWF) launched its Bihar chapter in Patna. An announcement was made by Shri Mangal Pandey, the health minister of Bihar who was the chief guest at the opening of the chapter. He announced Rs. 5 lacs as a grant for acid attack survivors in Bihar to seek treatment in any CGHS-approved hospital.  The honourable Chairman of ASWWF himself attended the event along with the state’s health minister, Dr. H P Kanoria. A number of dignitaries attended the programme including Shri Manu Maharaj (IPS), Senior Superintendent of Police, Patna and Dr. V. P Choudhury, HOD, Plastic Surgery, Patna Medical College. The most horrific and nastiest form of violence against women is acid attacks. An acid attack is a deliberate and premeditated use of acid against another individual without any kind of mistake or oversight by her. There are many reasons why this might be the case, including the affordability of acid, a male-dominated and male-dictating society, antagonism, scorned and disdained lovers, etc. Cases of acid attacks are mounting, swelling and escalating like anything. The perpetrators do not realise the consequences of such menacing, ominous and looming attacks on innocent victims and throw acid on them, distorting their face, limbs and different parts of the body. It is high time now. Something stringent needs to be done to curb this evil in our society. Otherwise it will be too late, and innocent creatures on this earth will continue to suffer for no fault of theirs. The authors would be dealing with various facades, legal remedies and compensations dealing with acid attacks in the present society. Kanoria Foundation and SREI have always condemned this act and therefore its efforts are considered vital in society.  SREI is a helping hand and a leading societal force. Three survivors are employed at SREI Foundation itself (2017-2018). Five survivors were employed at Lemon Tree Hotels (an Indian hotel chain that has seen rapid growth). As always, the primary objectives were to collect data, identify partners, establish chapters and associates, raise awareness, and raise resources to continue to work on behalf of survivors. A lot has been accomplished, but there is still much to do:

In order to treat traumatised survivors of acid and thermal burns, ASWWF has produced the first ever Trauma Informed Care Kit (TICK), which contains an exhaustive guide. During the first period of acid violence in India, ASWWF prepared a Situational Analysis Report. Through the display of posters at police stations within their jurisdiction, ASWWF has initiated joint awareness campaigns with Kolkata Police, West Bengal Police, Odisha Police, and Mumbai Police. More states will be covered soon. ASWWF also has an extensive presence in India, which can help the organisation reach survivors more quickly and better. It has helped many women in need and made headlines in India’s leading newspapers ever since it was formed. ASWWF has assisted many disadvantaged women since it was founded and provided headlines in leading Indian newspapers. ASWWF is often cited by organisations such as NALSA and different media as a source for statistics. With the help of some other like-minded organisations, ASWWF organised free surgery camps where free corrective surgery was given and several survivors of acid/burn violence received medical assistance. ASWWF has assisted survivors in finding employment in a variety of private sector organisations. The organisation has also hired survivors.

As an advocacy organisation, ASWWFs mission is to improve the lives of disadvantaged women and enable them to stand up for themselves, so they won’t have to suffer cruelties because of their helplessness in the future.